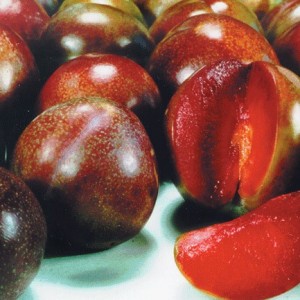 Maybe the most well known of all blood plums, the Satsuma plum is a mid season plum, largest in size, rounded dark red, firm juicy spicy flesh, described by one local nurseryman here as having a ‘satisfying clove like depth’ of flavour. The Satsuma plum is a good bearer, useful for preserving and bottling, partly self fertile and gives even bigger crops if cross pollinated.